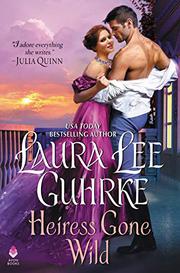 When a man is named guardian of his best friend’s daughter, he’s expecting a child, not a gorgeous young woman who’s ready to take life by the horns and who’ll challenge every attempt to keep her staid and respectable.

Englishman Jonathan Deverill didn’t even know his American business partner had a daughter, so it comes as a surprise when he names Jonathan the girl’s guardian. He’s even more stunned to discover that the girl he’s visiting at New York’s Forsyte Academy is actually a beautiful young woman who’s been waiting her whole life for her father to take her away to live a life beyond the school. The fact that he never did, despite a lifetime of promises, makes Marjorie McGann angry and hurt, feelings exacerbated when she learns he’s died without ever visiting her, much less ushering her away from her boring, sheltered life. Marjorie is restless, ready to use her hefty inheritance to live an interesting life, get married, and have children. Jonathan infuriates her by telling her he needs to leave her at the school for a few more months while he gets some business settled and prepares a place for her with his family in London. Not interested in waiting one more day, she buys herself a cabin on his ship to England. So begins a battle of wills between two people who are fighting their attraction to each other while trying to do what’s best for themselves and each other, knowing their goals are far too different for them to be together. Or are they? Guhrke continues the Deverill family saga with Jonathan’s story, which is fun and engaging, though the author does her characters some disservice. At times, Marjorie and Jonathan both furiously resist things that make perfect sense and overemphasize conflict which feels easily solved.

Effervescent and appealing despite some missteps.