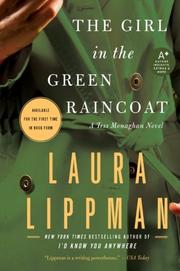 THE GIRL IN THE GREEN RAINCOAT

From the Tess Monaghan series, volume 11

Big changes come in small packages for a Baltimore private eye sidelined by an unplanned pregnancy.

Tess Monaghan (I’d Know You Anywhere, 2010, etc.) never anticipated being pregnant, much less being confined to bed rest by pre-eclampsia. But as she sits on her sun porch wondering whether her maternal instincts will ever kick in, her appetite for sleuthing continues full blast. She sees a young woman and a dog clad in matching fashion-forward green slickers walking in Stony Run. After several days, the woman disappears, and her abandoned Italian greyhound is leaving messes in Tess’s living room. Tess traces the dog’s owner, Don Epstein, who first says his wife is away on business, but later confesses that Carole just up and left him. Not that Epstein’s track record with women is anything to write home about: His first wife Mary was shot in an attempted carjacking, and his second wife Annette died of a hospital-contracted staph infection. In between Mary and Annette, Epstein’s girlfriend, Danielle Messinger, broke her neck falling down a flight of stairs—an accident Carole Epstein knows about full well, since Danielle was Carole’s sister. With a nod to Hitchcock’s Rear Window, Tess uses her confinement as an excuse to exercise her ingenuity in trying to prove that a self-proclaimed abandoned husband is really a cold-blooded killer.

Lippman’s slender tale, serialized previously in the New York Times Magazine, brings back her feisty star detective at her most belligerent, most vulnerable and perhaps most appealing.