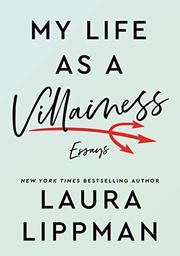 MY LIFE AS A VILLAINESS

In her first book of nonfiction, bestselling crime novelist Lippman gathers 15 essays on motherhood, family life, and her writing career.

Except for the six months after college when she worked part-time at “the finest Italian restaurant in Waco, Texas,” Baltimore native Lippman always earned a living by her pen. First, she was a newspaper reporter who eventually went to work for the Baltimore Sun. Then, in 1997, she fulfilled a childhood fantasy and became a novelist. Here, the author offers a collection of personal essays that she started writing in 2017, in part to overcome a “distaste for the first-person pronoun.” Mining personal experiences for material, Lippman provides humorous insights into her life as a writer, mother, and wife to acclaimed TV writer and producer David Simon. She opens the book with an essay about finding self-acceptance at age 60. After spending too much time struggling with her body image, she finally learned to say “the most infuriating [thing]” possible for a middle-aged woman: that she actually liked the way she looked. A positive self-image was the gift she wanted to give her young daughter, whom she discusses in “Game of Crones.” Bucking convention, Lippman became a first-time mother to an adopted daughter while in her 50s, which led to numerous questions about whether the child was her granddaughter. A dedicated career woman, the author reveals how motherhood “made me less robotic [and] more inclined toward improvisation and spontaneity” and marked the beginning of the most successful period in her writing career. Yet for all her fame, Lippman still sees herself as a “happy gherkin alongside a big dill,” Simon. Showrunner for TV cult favorite The Wire, Simon still keeps “pushing, pushing, pushing” and inspiring Lippman to never “live inside…success.” Candid and quirky, this book will have special appeal to fans of her crime fiction.

A wryly observed collection from a reliably good writer.