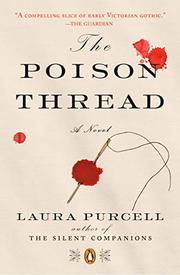 A Victorian do-gooder meets a young seamstress, on trial for murder, who confesses to killing her employer with just a needle and thread.

Wealthy heiress Dorothea Truelove devotes her charitable work to visiting the female inmates of Oakgate Prison. When she receives a note from the prison matron informing her that “we [have] another one,” Dorothea is thrilled because this is her chance to prove her ideas about the science of phrenology. Convinced that a person’s character, including “the propensity to kill," is mapped out on the cranium, she is eager to interview her subject, 16-year-old Ruth Butterham, who stands accused of murdering her mistress, “slowly, by degrees.” With each visit, Ruth tells Dorothea the sad and brutal story of grinding poverty and devastating loss that led to her involuntary servitude and appalling abuse at the dressmaking shop of Mrs. Metyard and her daughter, Kate. A talented sewer, Ruth is convinced she has a supernatural ability to kill as she stitches her emotions into the garments she makes. Of her victims, some were accidents, she tells Dorothea, but others she hated, like Rosalind Oldacre, her tormentor from school, and the abusive Metyards. The rational Dorothea believes Ruth is lying, but the girl's phrenological profile reveals a “wonderfully retentive memory" and a tendency toward honesty. Meanwhile, Dorothea, who is secretly being courted by police constable David, must fend off her widowed father’s efforts to betrothe her to Sir Thomas Biggleswade. Purcell (The Silent Companions, 2017) cleverly plays two unreliable narrators off each other here. Ruth is more compellingly drawn, but Dorothea’s obsession with head bumps is downright creepy. Who is the dotty one? Unfortunately, the supporting characters are not as fully fleshed out, primarily serving as plot devices in the novel’s sudden and rather clunky climax.

Inspired by an 18th-century murder case involving a milliner and her daughter, Purcell’s slightly flawed novel expertly threads splashes of Grand Guignol violence with dark gothic atmosphere to make for a chilling and engrossing read.