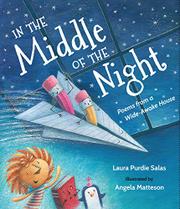 IN THE MIDDLE OF THE NIGHT

Poems from a Wide-Awake House

Short poems describe the adventures of inanimate objects found in a young child’s house at night.

Initial poems come from the perspective of brightly colored animal toys, stuffed and otherwise, who are ready for a raucous night of play after their human child falls asleep. Art supplies, an errant library book, items of clothing, and even a toilet, among other things, offer their points of view in the pages that follow. Some poems appear on double-page spreads; in other cases two or three poems are featured in the same amount of space accompanied by vignettes. The poems vary in form and impact, but the feel overall is cheery and energetic. Two of the most engaging and recognizable forms, acrostic and concrete, bring the parents’ belongings to life: A bottle of fragrance laments her immobile state, and a necktie uses humorous wordplay to describe its function. Matteson’s paintings, created in acrylics and gouache with colored pencil, employ multiple shades of blue as background to evoke the nighttime setting. Brighter shades and unusual perspectives match the liveliness of the text. Simply drawn faces on the objects convey emotions effectively, while stick-figure–style arms and legs provide the means of locomotion and heighten the whimsical tone. The child who sleeps through this activity has beige skin and straight, dark hair.

Familiar objects, playful language, and imaginative action add up to a collection that will amuse young listeners and, perhaps, inspire them to undertake imaginative explorations of their own