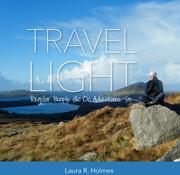 Almost everyone wishes that they could travel more, but so few people are able to make it a priority. With the omnipresent stresses of work and family, it can be easy to put off desired travel unless someone gives you a friendly shove, as the author attempts to do here. “I’d love to give you a nudge and tell you a few tales about how travel has changed me,” writes Holmes in her introduction to this emphatically pro-vacation volume. About two years after quitting her ad agency job in 2003 and starting her own marketing company, Holmes embarked with a friend on a whirlwind tour of Paris before joining a hiking group that climbed 4,000 feet up Mont Blanc. Another time, she and three friends took a car on a 10-day odyssey through Spain and the Pyrenees. Holmes encourages Americans to travel within the United States as well, as she did during an adventure across California and Nevada as part of a group that she playfully refers to as “5 Hos and a Bro.” Nearly every page of the book features uncredited, full-color photographs of Holmes and her companions or of some of the sites that she describes. Holmes is an affable, if idiosyncratic, tour guide; for instance, she’s a big fan of cheeky acronyms, such as “BYOB” for “Be Your Own Boss” or “PWDS” for “People Who Don’t Suck.” Her stories are fun, though not outrageous, and involve such things as botched hotel reservations or munching on unusual foods. She mostly visits rather well-known places during her one- or two-week getaways, and by making clear how much fun she had and how much she cherishes her memories, she’ll instill a powerful desire in the hearts of readers to do similar things with their own friends and family members. Indeed, by the end of the first chapter, some readers may start planning excursions of their own.

A lighthearted travel book that encourages through example.