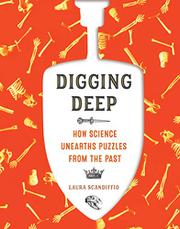 How Science Unearths Puzzles from the Past

A variety of explorations is used to highlight the use of remarkable new techniques for revealing the secrets of the past: Ötzi the Iceman; the use of poison in hunting by African hunters and gatherers; the lost city of Angkor in Cambodia; the search for Arctic explorer Sir John Franklin’s lost ships, HMS Erebus and Terror; the unearthing of the grave of Richard III; and the discovery of Stone Age paintings in the French cave of Chauvet. Each new technique is carefully explained, from lidar (light detection and ranging), which reveals in remarkable detail the vast city of Angkor even though little remains of its mostly wooden construction, to the combined use of mass spectrometry and liquid chromatography to detect traces of plant-based poisons on Egyptian arrowheads. Each chapter begins with a brief, fictional narrative that describes the origin of the object of archaeological interest. Annoyingly, these tales are generally undated, although a few pages later, each chapter includes a timeline that does offer a date for the original event. Helpful text boxes, numerous illustrations, and maps for each chapter extend the narrative, and very good backmatter contributes to the all-around solid presentation.