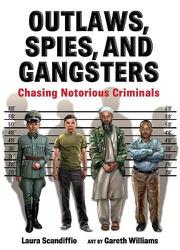 How a disparate bunch of “most-wanted” criminals were tracked down, even if the tracking took days, weeks, or years and years.

Scandiffio brings an unhurried, smooth and just-portentous-enough tone to the brought-to-justice stories of eight criminal characters that most every adult (though maybe not that many children) has heard of, from John Dillinger to Christopher “Dudus” Coke of Jamaica, Manuel Noriega to Osama bin Laden. Each miscreant’s last hours are chronicled, but so is a reasonably significant slice of history, often in boxed asides, lending a sense of immediacy and context to the action. She also pays attention to local color (except she doesn’t mention the “Lady in Red,” certainly local color to the nth degree in the gunning down of John Dillinger). There is an obvious disconnect between someone like Dillinger and the mousy spy Aldrich Ames or Vladimir Levin, a cyberthief at great remove from his loot, but there is also no sense of romanticism here, a suitable choice, as counted in this number are Adolf Eichmann and bin Laden. It is good to have this selection from around the world, not singling out some poor neighborhood or region, and the artwork lends a burly, yeomanly quality of hard work to the captors, just as it details the evolution of tracking through the century.

This rogues’ gallery of bottom feeders makes an appealing way to bring reluctant readers to history.