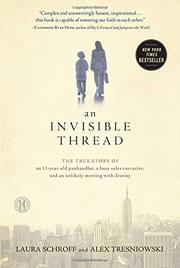 The True Story of an 11-Year-Old Panhandler, a Busy Sales Executive, and an Unlikely Meeting with Destiny

by Laura Schroff and Alex Tresniowski

A straightforward tale of kindness and paying it forward in 1980s New York.

When advertising executive Schroff answered a child’s request for spare change by inviting him for lunch, she did not expect the encounter to grow into a friendship that would endure into his adulthood. The author recounts how she and Maurice, a promising boy from a drug-addicted family, learned to trust each other. Schroff acknowledges risks—including the possibility of her actions being misconstrued and the tension of crossing socio-economic divides—but does not dwell on the complexities of homelessness or the philosophical problems of altruism. She does not question whether public recognition is beneficial, or whether it is sufficient for the recipient to realize the extent of what has been done. With the assistance of People human-interest writer Tresniowski (Tiger Virtues, 2005, etc.), Schroff adheres to a personal narrative that traces her troubled relationship with her father, her meetings with Maurice and his background, all while avoiding direct parallels, noting that their childhoods differed in severity even if they shared similar emotional voids. With feel-good dramatizations, the story seldom transcends the message that reaching out makes a difference. It is framed in simple terms, from attributing the first meeting to “two people with complicated pasts and fragile dreams” that were “somehow meant to be friends” to the conclusion that love is a driving force. Admirably, Schroff notes that she did not seek a role as a “substitute parent,” and she does not judge Maurice’s mother for her lifestyle. That both main figures experience a few setbacks yet eventually survive is never in question; the story fittingly concludes with an epilogue by Maurice. For readers seeking an uplifting reminder that small gestures matter.