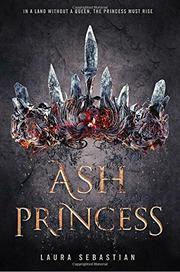 From the Ash Princess series, volume 1

The daughter of a murdered queen plots to take back what is hers.

With her country seized and her mother, the Fire Queen of Astrea, murdered by invaders when she was only 6 years old, Theodosia has been a prisoner for 10 years, stripped of her crown, her people enslaved. Theo (renamed Thora by her captors) is at the mercy of the Kaiser—the fearsome ruler of the Kalovaxians—enduring his malicious whims in order to survive. But when the Kaiser forces Theo to execute her own father, survival is no longer good enough, and she finally takes up the mantle of queen to lead her people’s rise to resistance in a land saturated in elemental magic. Debut author Sebastian has invigorated some well-worn fantasy tropes (a displaced heir, an underground rebellion, and a love triangle that muddies the distinctions between enemies and allies), delivering a narrative that crackles with political intrigue, powerful and debilitating magic, and the violent mechanisms of colonization even as it leaves sequel-primed gaps. Some details—like Theo’s crisis of identity and Hamletian indecision—work well to submerge readers in a turbulent and enthralling plot; others, like racialized descriptions that fall short of actual representation (Atreans are dark-haired and olive-skinned, Kalovaxians are blond and pale-skinned) and the use of magic-induced madness for narrative shock and awe feel lazy and distracting among more nuanced elements.

“Cinderella” but with genocide and rebel plots.