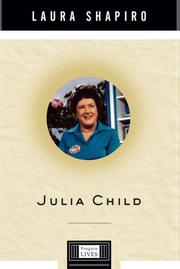 Shapiro (Something from the Oven, 2004) offers a vivid biography of the 20th century’s leading gourmand.

Food wasn’t very important to Julia Child when she was young. She grew up in California, eating the bland New England cuisine that her Massachusetts-born mother instructed the future chef to prepare. After attending Smith College, she meandered through the next decade, single, without a real career. In 1946, in part because she was trying to make herself more attractive to the man she would eventually marry, she took a cooking class. Child was not, Shapiro makes clear, a born chef: In the early days, chickens were blackened to a crisp; a duck exploded; béarnaise sauce congealed; brains dissolved into mush. As a new bride in France, floundering around for something meaningful to do, Child enrolled in more classes, this time at the Cordon Bleu. There, she learned to cook “with all her senses engaged . . . with a visceral understanding of raw ingredients.” A career—teaching Americans how to cook—was born. Why was she so successful on TV, in an era when cooking shows weren’t very popular? Because, says Shapiro, Child had no artifice. She was herself on television. She was also fabulously composed in the face of on-air kitchen disasters—as when a tarte tartin collapsed in a heap. Her informal charm and humor helped her accomplish one of her central goals—to demystify French cuisine, and convince Americans that they could, to borrow the title of her most famous book, master the art of French cooking. In Shapiro’s hands, Child emerges as a steadfast, vigorous, analytical person.

Shapiro has, in a brief book, made her subject truly come alive.