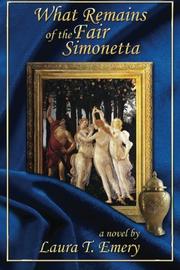 What Remains of the Fair SimWHAT REMAINS OF THE FAIR SIMONETTAonetta

From the The Remains Series series, volume 2

In this sequel, Emery (Disposition of Remains, 2013) offers a historical novel about a modern woman who suddenly finds herself in 15th-century Florence—as someone else.

The story begins in the bedroom of a palace, where the narrator comes to realize, rather suddenly, that she’s the famed Italian beauty Simonetta Cattaneo Vespucci. This is shocking news, because the narrator was dead for 11 years before she inhabited Simonetta’s body. In her prior life, as explained in the first book in this series, she’d been a 21st-century American woman named Anastasia Uqualla. So what, exactly, is she now doing in Florence in the time of Leonardo da Vinci? The narrator explains her apparent time travel as “a second chance to live in the world and era where I always felt I belonged.” Enter the painter Sandro Botticelli; in her former life, the narrator adored his work, and now, she soon finds that she’s falling in love with the man himself. Of course, forging a relationship is no easy task—not only because Simonetta is already married, but also because the mores of the era proscribe very specific behavior for a lady of her standing. Can their affections flourish under such circumstances? Although the narrative setup may seem a little long-winded, it results in a fun journey through an era of artistic giants, in which the Medici family rules over a society with a rigid class system. Readers get a glimpse of what the real Simonetta’s life might have been like when the narrator fumbles with cutlery (or the lack thereof) at dinner or confronts the difficulties of being dressed by a servant. The narrator’s attempts to soothe relations between Botticelli and his father feel forced, though they distract only slightly from the plot’s more burning questions, such as how one handles being the great beauty of Florence—a woman that seems to have “walked out of the ocean as Venus herself.” And did the historical Simonetta really love Botticelli? Although there are no easy answers to these questions, the book succeeds in creating some entertaining possibilities.

A strange yet touching account of a Renaissance-era love affair.