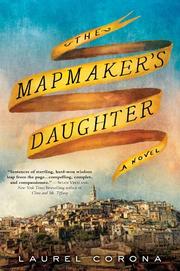 In Seville of 1432, Amalia Riba is the daughter of a renowned mapmaker to the Spanish court. Her family's favored status is dependent on their being Conversos, Jews who have converted to Christianity. Amalia and her mother still observe the Sabbath, however, secretly maintaining their Judaism. When Amalia's mother dies, she and her father go to Portugal, where he's employed by Henry the Navigator in the race to map Africa. Though she's still a child, Amalia is given precocious freedom in Portugal: She translates for her father and is befriended by the Abravanels, the most powerful Jewish family on the Iberian Peninsula. When she comes of age, Amalia marries Diogo Marques, a dashing explorer, but their marriage is a disaster. Diogo is gay and has drunken orgies downstairs, and the source of his considerable wealth turns out to be the African slave trade. Amalia is relieved when he dies in a storm, and she retreats a wealthy woman to the Abravenel compound, pregnant with daughter Eliana. For the first time, she lives openly as a Jew, and the richness of this life is a revelation. Then she falls in love with Jamil Hasan, an Islamic courtier from Granada. Though they cannot marry, Amalia accompanies Jamil back to Granada, where she tutors the grandchildren of the caliphate. The Alhambra is a paradise, as is the open secret of Amalia and Jamil’s relationship (they compose Rumi-like verse to each other), but he must marry, and so eventually she returns to Portugal. In Amalia’s middle age, Portugal too becomes an impossible place for Jews; she and the Abravanel family leave for Spain, where they raise money for Ferdinand and Isabella to drive the Moors from Granada, earning amnesty for themselves. Though the novel lags by the time we reach Amalia’s old age (which revolves around her grandchildren, losing focus), the depth and detail of the previous chapters make up for the finale’s shortcomings.

A rich, exhaustively researched portrait of Spanish Jews at the birth of the Inquisition.