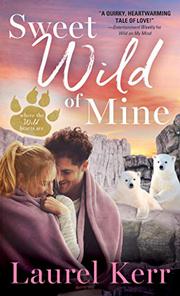 SWEET WILD OF MINE

A curmudgeonly Scottish author volunteers to work at a small zoo to get his career back on track and is soon reluctantly falling in love with the town, the animals, and the local tea shop owner.

Magnus Gray’s life choices have included remote locations and minimal human interactions, balanced by an affinity for animals. When his memoirs become bestsellers, he moves to London, but his acerbic urban commentary falls flat with fans. To revive his career, Magnus volunteers at the zoo in Sagebrush Flats, U.S.A., where the first person he meets is June Winters, the town’s resident blonde bombshell, sunny personality, entrepreneur, and busybody. June is used to men falling all over her and prefers a different type from Magnus: “Yes, June enjoyed handsome, debonair men….In contrast, the scowling Mr. Rude looked like a grumpy Paul Bunyan.” Still, she’s intrigued by the glowering Scotsman. Magnus just wants to be left alone, but an unexpected side effect of June getting his hackles up is that it mitigates his speech disfluency, and her own family’s experience with stuttering turns into the foundation of a growing friendship. The two become helpmates and confidants, leading to a passionate love affair, but June’s deep need to meddle may drive them apart. Kerr’s (Wild on My Mind, 2018) sophomore effort, the second title in her Where the Wild Hearts Are series, maintains the poignancy and originality of the first. Polar cub Sorcha, Magnus’ complicated childhood, and June’s elderly grandmother provide an emotionally complex spectrum of issues and events that June and Magnus navigate. Revisiting Sagebrush residents, animal and human—especially another feisty honey badger—is an added treat, though Kerr's excessive, sometimes unwieldy, use of simile and metaphor weighs down her otherwise great writing.

A delightful romance that’s both cheerful and heart-wrenching.