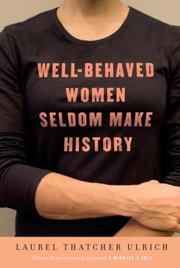 A portrait of women engaged in the history-making business, as well as a meditation on the occasional burden of being immensely quotable.

Ulrich (History/Harvard; The Age of Homespun, 2001, etc.) wrote the titular sentence, now found on everything from T-shirts and mugs to compendiums of quotable women, in a scholarly article published in 1976. As she tells it, she was at the time “a 36-year-old housewife enrolled in a graduate seminar in early American history.” Curiosity about the everyday lives of colonial women prompted an article on the funeral sermons of pious dead—and the sentence that launched a thousand bumper stickers. “My objective,” she writes, “was not to lament their oppression, but to give them a history.” Three decades and a few feminist movements later, her single line has spawned countless debates over what it means to make history as a woman, as well as what it means for a lady to be well-behaved. Did Marie Curie succeed because she “misbehaved,” by pursuing science against the social mores of her time? Or did she succeed by behaving exquisitely well in science? Was Rosa Parks a revolutionary figure because she was a simple seamstress who made a single defiant stance? Or because she was a quiet, hardworking and dedicated member of the NAACP? Engaging in this debate, Ulrich writes primarily (and wonderfully) about the lives of three female writers separated by generations and continents. Christine de Pizan, Elizabeth Cady Stanton and Virginia Woolf each chronicled in her own way not just the bold, brash women who defied convention, but also the quieter ones who made history by simply recording their lives. Ulrich is especially interested in the ways individual women reconcile the competing demands to act out or shut up.