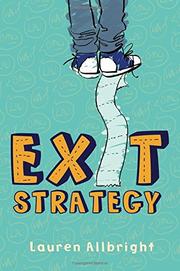 Ross has elevated the art of leaving to an art form, so when he has to stay at a school for longer than a few months, he has trouble adjusting to his new reality.

Because of his mom’s career as a musician they move a lot. In fact, Ross has had to leave 11 different schools, and he’s only 12. For his last day at a particular school, he’s developed a tradition of making a dramatic exit so people remember him as the funny kid. But when his grandfather needs help while recovering from a fall, Ross’ mom takes a job that doesn’t involve any traveling, and Ross is stuck at his new school indefinitely. To fit in, he makes a plan, which doubles as his science project—become a funny person so people will like him. Using the scientific method, he researches, develops a methodology, and tests his jokes. Will people be impressed? Will Ross make any friends? Allbright mixes humorous diagrams and tables in with a charming first-person narrative in her debut novel about Ross and his classmates, who all seem to be white. Ross’ inner dialogue is imaginative and self-deprecating, and most of the events in the book feel like natural consequences to a kid’s habit of overthinking and trying too hard.

Using the scientific method to make friends—clever and surprisingly effective.