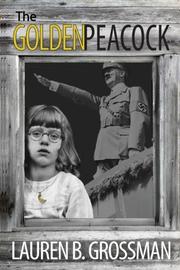 by Lauren B. Grossman

A successful author chasing a story becomes drawn into a perilous search for a former Nazi in this novel.

Rainee Allen’s fiction debut is a bestseller and lands her a new book deal and a substantial advance. But she’s stuck in a creative drought, unable to come up with her next big idea and worried her success was a fluke. Then she stumbles on the identification card of Holocaust survivor Jana Lutken, which was given to her when she visited a museum in Washington, D.C., years earlier. She notes that she shares a birthday with Jana, separated by 30 years, and is inspired to track her down. By a stroke of luck, her best friend, Shelley, is sent to London for a work assignment, and Rainee tags along, hoping to discover Jana there. The writer eventually finds Jana in a nursing facility, her last name now Bowman as the result of marriage, alone and addled by Alzheimer’s. Rainee notices that Jana is frozen with terror when a physician, Dr. Wagner, is in her presence and decides to conduct her own private investigation, eventually harboring suspicions that he is the son of a Nazi responsible for the sinking of a ship of orphaned children, one that Jana’s brother, Max, was on at the time. The deeper Rainee delves, the more dangerous her inquiries become, and she starts to believe she is being followed by two mysterious men, unsure if they are sent to protect or apprehend Wagner’s father. Grossman (Once in Every Generation, 2011) deftly leaps back and forth in time, simultaneously following Rainee’s journalistic investigation and Jana’s suffering as a result of the war. The author adroitly depicts the degradations Jews were subjected to by their tormentors as well as the inspiring attempt by Jana to transcend her trauma. The writing is clear, if lacking in literary flair, and the pace is invitingly brisk. But Grossman has a weakness for clichéd descriptions—even her protagonist admits that her two enigmatic pursuers seem like characters from a John le Carré novel. In addition, the entire plot hinges on some extraordinary coincidences that will likely challenge readers’ incredulity.

A flawed but intelligently entertaining mystery.