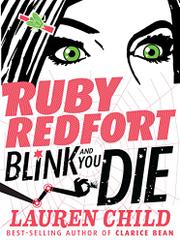 RUBY REDFORT BLINK AND YOU DIE

From the Ruby Redfort series, volume 6

The young agent and codebreaking genius, recruited by the secret Spectrum organization, risks life and limb to uncover the traitor within its ranks.

With Spectrum agents sidelined while the traitor remains at large, Ruby’s forced to take survival-training classes. (Lessons in surviving an avalanche and avoiding hypothermia soon come in handy.) Is the traitor the same evildoer who terrifies even an archvillain like the Count? The answer may lie in Spectrum’s only other child spy, Bradley Baker. Ruby’s research takes her to Spectrum’s well-protected underwater vault on Meteor Island, where she learns that Baker, believed killed in a plane crash, may still be alive. Ruby’s familiar sidekicks return: loyal friend Clancy; housekeeper and TV bingo addict Mrs. Digby; Ruby’s clueless parents; and Hitch, posing as the family butler to keep an eye on Ruby. As clues pile up, new dangers loom; Ruby evades them with panache and nifty high-tech gadgetry, including a bicycle with a hyperspeed setting and a fur cape that doubles as a parachute. Readers can try a few codes that Ruby cracks (they’re explained in an afterword). Ruby’s world remains a largely white one; its decidedly retro atmosphere (a 1970s California that feels more like the ’50s) is reinforced by the narrative’s meandering pace, asides, and non sequiturs.

This final installment offers more than the usual complement of cliffhangers, daring escapes, and surprises; fans of this droll, quirky, and sui generis series won’t be disappointed.