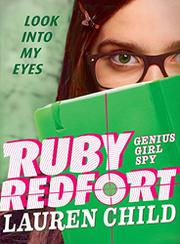 RUBY REDFORT LOOK INTO MY EYES

From the Ruby Redfort series, volume 1

Ruby Redfort, the young sleuth in an imagined book series adored by Child’s already-established character Clarice Bean, begins her very own series with this lukewarm mystery.

The daughter of two clueless but kind socialites, Ruby displays an uncanny talent for observation from an early age. When her family’s beloved housekeeper goes missing along with the entire contents of their house, and a likable but unlikely butler appears on the scene, Ruby suspects there is more to the situation than meets the eye. After being tapped by a spy agency called Spectrum to assist in an investigation, Ruby is pulled into the thick of a plot involving a museum exhibit her parents are staging. Character development is eschewed for quirkiness that can be charming, but it wears thin well before this offering winds itself down. Codes and puzzles featured throughout add some spark, and readers with a penchant for ciphers will enjoy working out the messages passed between Ruby and her best friend Clancy—and can visit a tie-in website for clues. However, the purposefully corny tone of Ruby’s narrative voice ("Did anyone ever tell you that you can be a royal pain in the derriere?") falls flat.

Fizzy style fails to buoy a slow-moving plot. Fans of Child’s other works, however, will likely still be interested in checking this one out.