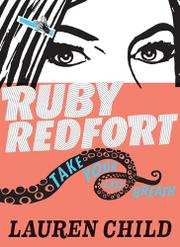 From the Ruby Redfort series, volume 2

Thirteen-year-old secret agent Ruby Redfort (Look Into My Eyes, 2012) barely has a week to breathe before finding herself in the middle of another dastardly evil plan—oh, there are also pirates, a sea monster, a mysterious stranger and a lost treasure, too.

This retro spy adventure opens with a series of strange marine disturbances. Coast Guard signals are scrambled, all the fish are gone, and there is a whispering sound coming from the ocean. Plus, one of the divers from Spectrum, the supersecret spy agency where Ruby trains, has washed ashore, dead. To add to the ever-evolving, sometimes belabored plot, the boat that Ruby’s parents are on is attacked by pirates, leaving both Sabina and Brant Redfort missing at sea. All of the subplots are ocean-related, but readers (and Ruby) don’t know how they are connected until Count von Viscount, the villain from the first volume, shows up briefly—his manifest evil nature enough to tie everything together. Child’s cliffhanger chapter endings help the pace tremendously, and the codes (musical and binary) that Ruby deciphers are great fun. But thrilling and edge-of-your-seat adventure? That seems to be the territory of other literary spies, despite a cover that oozes intrigue.