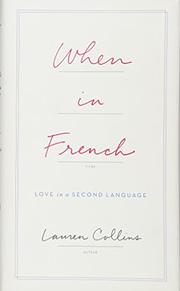 Love in a Second Language

A memoir of unexpected love with a Frenchman.

While living in London as a staff writer for the New Yorker, Collins fell in love with Olivier, who grew up in a beach town near Bordeaux. He spoke English fairly well, but the author spoke no French. In her cleverly organized, well-written story, Collins explores how language differences can be overcome with difficulty but can also threaten romance due to poor communication. Raised in North Carolina, Collins chose London as her overseas locale partly because she lacked confidence about developing a work life and a private life in a foreign language. Due to her sudden interest in Olivier, the author had to find the resolve and the skill to learn French beyond the tourist basics. As the memoir unfolds, Collins does not spare herself, sharing her apprehensions and her missteps with candor and frequently with humor. She also shares her misunderstandings and arguments with Olivier as they labored to reach a comfortable place in a bilingual romance. Collins was also painfully aware of differences other than language. She was a writer, he a mathematician; she was a believer in organized religion, he an atheist. She also acknowledged that her romantic history featured poor judgment in men, even when language and culture presented no obvious barriers. As Collins gradually decided to commit to learning French because Olivier seemed worth the effort, she breaks from the personal narrative to share scholarly knowledge with lay readers—e.g., why is the world divided by so many languages and dialects? How did French develop specifically? What are the sometimes-surprising differences between English, especially American English, and French, regarding sentence structure, gender identification of specific words, and linguistic purity? Throughout, the author ably weaves together the personal and the historical.

A memoir filled with pleasing passages in every chapter.