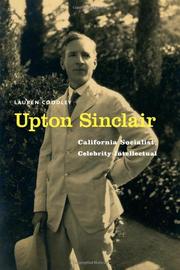 Coodley (California: A Multicultural Documentary History, 2008, etc.) claims that Sinclair (1878–1968)—social justice advocate, California gubernatorial candidate and author of the classic The Jungle—deserves to be viewed through a feminist lens.

Unlike most men of his era, Sinclair understood women's issues and advocated effectively for them. Coodley painstakingly explains Sinclair's interactions with his female family members, his wives and various feminists—some of them well-known (e.g., Jane Addams, Margaret Sanger, Helen Keller, Charlotte Perkins Gilman and Elizabeth Gurley Flynn), some of them nearly forgotten. (In an appendix, Coodley lists his “women friends,” along with citations for readers interested in learning more about each one.) Since the story behind Sinclair's traveling to Chicago in his early 20s to investigate meatpacking practices in the stockyards has been told countless times, Coodley mostly avoids discussion of The Jungle and instead focuses on some of Sinclair's many other books and pieces for periodicals. The child of an alcoholic, Sinclair campaigned in favor of temperance, often thought of as a "woman's issue," understanding as he did the ill effects of alcoholism on the family unit, especially wives and mothers. The range of issues for which Sinclair sought reform affected the poor more than the middle class or wealthy, and his sincere compassion comes across as boundlessly admirable. Coodley refers multiple times to exemplary full-length biographies of Sinclair and does not pretend to cover his entire life in depth in such a slim volume. Rather, she hopes to ignite curiosity in readers, who will then study Sinclair's life more fully by consulting his own writings and other biographies.