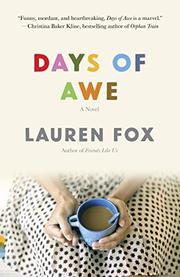 When a middle school teacher’s best friend dies in a one-car accident, her world begins to fall apart.

Isabel Applebaum Moore and Josie Abrams have been inseparable since Izzy’s first day at Rhodes Avenue Middle School, keeping each other sane through the principal’s inane speeches and the younger teachers’ aggressive perkiness—not to mention the students’ hormonal moods. Josie even married Mark, Izzy’s friend since kindergarten, where they were seated next to each other, “two little alphabetized Jews, dark haired and slightly lost in a forest of Midwestern consonant clusters, all those strapping, blond Schultzes and Metzgers and Hrubys and Przybylskis—strapping even in kindergarten, if memory serves.” What happens following Josie’s death isn’t all that unusual: Isabel starts spending most of her time in her ratty old sweatpants, “which Josie used to call a blend of cotton and self-loathing”; her overwhelming sadness deals the fatal blow to her already rocky marriage to the good-hearted Chris; her 11-year-old daughter, Hannah, who also loved Josie, struggles with her changing family; her mother, Helene, a Holocaust survivor, coaxes her into attending a support group for “relationships in transition,” where she tentatively bonds with a good-looking older man named Cal by cracking jokes—just the way she bonded with Josie at their first staff meeting at Rhodes Avenue. Josie pushes Chris away and tries to pull him closer; she does the same with Cal and even with her old friend Mark. She thinks back on her relationship with Josie and gradually reveals the secrets they shared. What makes the book so special is Isabel’s smart, acerbic voice and her way of seeing everything from a sharp angle. Fox (Friends Like Us, 2012, etc.) studs Izzy's narration with surprising metaphors, turning ordinary domestic items into dangerous beasts (“the herd of wild minivans”) and Josie’s fatal accident into something almost domestic (“Her rusty 11-year-old Toyota skidded off the slick road like a can of soup rolling across a supermarket aisle”). Isabel (and Fox) has such an offbeat way of looking at things that you’ll eagerly keep reading just to see what she’s going to say next.

Read it for the magnetic voice and Fox's ever interesting perspective on work, love, friendship, and parenthood—because, really, what else is there?