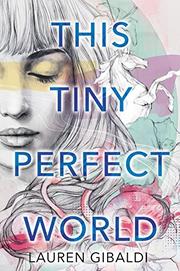 Penny’s grown up in a tiny Florida town, embracing a future that everyone assumes will include inheriting her family’s diner and marrying her high school sweetheart, Logan. Attending a summer theater camp, on scholarship, before her senior year feels more like self-indulgence than career preparation. However, several of Penny’s pre-camp reflections already foreshadow changes on the horizon. First she describes a companionable silence with Logan as “mostly” comfortable and then moments later boldly concludes that her friendships will never change because “we have it all planned out—our futures here. Together.” So it’s not entirely surprising when her more-cosmopolitan theater friends’ dreams of acting in the big cities make Penny’s pre-determined small-town future begin to feel dull. Nevertheless, Penny’s wracked with guilt about viewing the family’s legacy as a burden, and bridging the gulf between Penny’s and Logan’s future expectations bids to be a difficult—and unresolved—feat. Gibaldi sensitively develops Penny’s desire for both independence and the safety net of Logan’s love, although secondary storylines—especially Penny’s father’s new romance—occasionally feel underdeveloped. Penny is depicted on the cover as white, and the lack of racial markers points to a mostly white cast.

Penny’s conflict about her future is believable, and readers facing similar choices should find much that is recognizable.