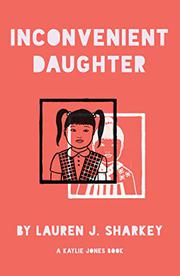 A transracially adopted girl struggles during high school and college.

Rowan Kelly, adopted from Korea by Catholic parents from Long Island, has never known another home. And yet, her classmates and community identify her by her differences, though she knows nothing of her birthparents or Korean culture. Rowan is confronted with this disconnect on her first day of kindergarten when she’s asked why she doesn’t look like her mother, and another child replies that it was because her "real mommy...didn’t want [her].” These words plant a deep-seated fear in Rowan that she has never really been wanted by anyone, not her birth mother or her parents (who adopted after failed fertility treatments). Rowan’s relationship with her mother grows ever more tumultuous, and in true teenage fashion, she can't convey her fear of abandonment. Once she moves to college, Rowan cuts off all contact with her family after her boyfriend becomes abusive, the beginning of years of  isolation from everyone around her as she flunks out of school. This debut novel vividly details the awkwardness of high school and heartbreak of rejection. Rowan's first-person narrative voice provides sharp, devastating emotional insight in recalling these moments. Yet the novel opens with Rowan’s implying to a nurse that she was raped, a long hospital scene that is woven throughout the length of the book in between Rowan’s life stories. It's hard to know how to respond to these scenes, as Rowan’s emotional healing and reckoning with her decisions are told quickly rather than as part of the story. This is a significantly felt absence, especially given the serious nature of these scenes and the extended focus on her most traumatizing years.

This novel’s uneven focus detracts from its fresh voice and important expansion of narratives about adoption.