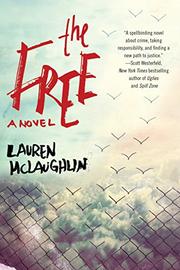 A Boston-area youth in juvenile detention finds redemption in stories—his and his fellow inmates’.

Car thief Isaac West just has to get through 30 days in juvie, and then he’ll be out and able to protect his beloved little sister from their appalling single mother, an alcoholic prostitute. But he doesn’t bargain on the group-therapy program that has him writing down his “crime story” and then acting it out in a process that combines story critique and reliving his most painful memories. When he’s not in therapy he hangs with the geeks in computer class, mostly so he can email his sister, which is how he almost unwittingly becomes “poems and shit” editor of the inmate newsletter, The Free. McLaughlin creates a correctional facility that’s realistically organized along gang and racial lines, with the exception of the geeks, a multiethnic crew of lovable cons. Actually, all the inmates are lovable in the end, believably victims of circumstance despite their horrifying crimes. These circumstances, despite the constant acknowledgment of race, are largely race-free however, mostly contingent on terrible parenting. Biracial, brown-skinned Isaac himself possesses a physical ambiguity he uses to avoid attention, allowing others to see him as black or Hispanic to avoid conflict. But the only acknowledgment the book makes of institutional racism is Isaac’s dismissive acceptance of an “ ‘essay’…about how racist the criminal justice system is.”

A penetrating look at the power in the stories we tell ourselves but just a glancing one at the juvenile-justice system.