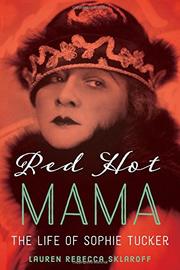 In 1906, Tucker took her first paying job in a seedy New York nightclub, beginning a 60-year career that included vaudeville, radio, movies, and TV. In 1953, 1,500 people gathered at a Waldorf Astoria gala to honor her success: “Sophie Tucker is to show business what Eleanor Roosevelt is to politics,” comedian Milton Berle remarked at the event. Sklaroff (History/Univ. of South Carolina; Black Culture and the New Deal: The Quest for Civil Rights in the Roosevelt Era, 2009) sensitively traces the unlikely rise of the daughter of Jewish immigrants, a woman who never fit the svelte body image of popular female entertainers and whose “sexual movements and provocative delivery” shocked some viewers. Tucker was determined to be a star: married with an infant son, she separated from her husband and left her son in the care of her 16-year-old sister. “I have decided I can do big things,” she said. Once she began to earn money, she helped her family financially, but Sklaroff has no evidence that Tucker felt guilty about leaving. In fact, the author faces a considerable challenge in probing Tucker’s feelings and motivations. She draws on Tucker’s autobiography, published in 1945, which “contained little about her family,” especially her son, and “did not reveal anything…that wasn’t already part of public record in interviews and press reports.” That material made its way into 400 scrapbooks that Tucker amassed, filled with clippings, programs, speeches, birthday cards, and sheet music. Sklaroff’s portrait, then, is necessarily of the public woman, a much-acclaimed entertainer who chucked her early performances as a “Coon Shouter,” wearing blackface, to become a glamorous, bespangled singer who, in 1952, was “listed among ten of the biggest nightclub ‘money-makers,’ an elite group that also included Sinatra, Lena Horne, Dean Martin, and Jerry Lewis.” She was also a generous philanthropist, mentor, outspoken supporter of African-Americans, and model for performers such as Ethel Merman and Bette Midler.

An appreciative celebration of a dynamic entertainer.