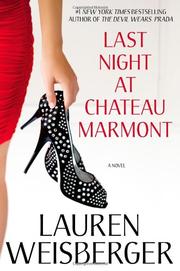 In her fourth novel, the author of The Devil Wears Prada (2003) considers what it would be like if your husband became a rock star. The short answer: not that great.

Everyone agrees Brooke and Julian are the real thing: madly in love and mutually supportive. Theirs is a marriage that could weather anything, except maybe the toxic storm of modern celebrity. Julian, a singer-songwriter, is in the final stages of recording his album for Sony. He’s still an unknown but has a following in Manhattan, which includes his wife Brooke, who first fell in love watching him sing at a dive bar. She works 60 hours a week as a nutritionist (at a hospital and part time at an elite girl’s school) all to help Julian achieve his dream. Then fame comes like an avalanche. A Tonight Show appearance pushes his single up the charts, and what follows—more TV appearances, a Vanity Fair cover, endless traveling, starlet photo ops—is just the stuff to weaken a marriage. Brooke becomes a nag, and meek Julian, manipulated by his sleazy manager, is transformed into an overworked brat (albeit one with a superior wardrobe). Brooke can’t take time off from work, so they spend weeks apart, and when they’re together, everything between them seems different. Then come the vicious articles in the gossip rags, insinuating there is trouble in their marriage, which unsurprisingly brings trouble to their union. The novel has difficulty convincing the reader that any sane woman would behave as Brooke does—refusing to take a sabbatical from her 60-hour work week, passing on a romantic Italian vacation, stubbornly refusing to live it up with her husband. By the end she realizes she is as much to blame for their relationship’s collapse as those compromising photos of Julian and a floozy at the Chateau Marmont. Only a miracle, or maybe some simple compromise, can get Brooke and Julian back together.

A sudsy insider’s look at the celebrity machine—and the cruel world it creates.