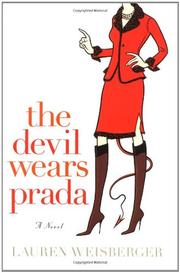 A junior assistantship to the editor of the world’s top fashion magazine (“The job a million girls would die for”) provides endless fodder for a one-note but on-the-money kiss-and-tell debut.

Andy, or, as her boss from hell calls her: “Ahn-dre-ah,” harbors dreams of writing for The New Yorker, but her luck runs out—or runs high, depending on your priorities—when her first job interview lands her at Runway magazine, beholden to Miranda Priestly, “solely responsible for anticipating her needs and accommodating them.” Intelligent, sarcastic and without a smidgen of interest in fashion, Andrea quickly learns the Runway culture, from the necessity of being tall, emaciated, slavish, and half-naked in winter to the perks of town cars, shopping bags filled with designer duds, and the promise of any job after one year of servitude. A few weeks of dealing with the insensitive, sadistic and imperious Miranda leave our heroine on the verge of abdicating, but before long she’s joining her colleagues in “the classic Runway Paranoid Turnaround . . . scrambling to negate whatever blasphemy is uttered” about the divine Miranda.” Outside of work, Andrea has a perfectly nice socially conscious boyfriend from her college days at Brown, a best-friend-slash-roommate with a drinking problem who’s getting her doctorate at Columbia, a loving family in Connecticut, and no time for any of them as she races to retrieve Miranda’s French bulldog puppy from the vet, hire a nanny for her children, make 12 trips in stiletto heels to Starbucks for her coffee in between sorting her dirty dry cleaning. It’s only a 14-hour day! Ultimately, of course, everything explodes, and in the end, of course, righteousness prevails.

Weisberger writes with humor and authority, but her plot circles like a whirlpool—and by the time Andrea’s ready to face some hard choices, it’s difficult to care. Her exhaustion is contagious.

(N.B: Weisberger, this season’s buzz of the town, was an assistant to Vogue editrix Anna Wintour—read: Miranda Priestly—giving this putative roman-à-clef an added splash of juice.)