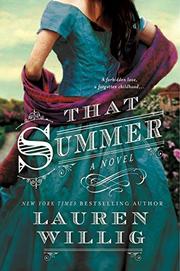 A New Yorker inherits a house in England where she discovers the tragic romance of a 19th-century ancestor caught up with the Pre-Raphaelite Brotherhood.

Though born in London, Julia has little memory of her childhood there. After her mother’s death in a car accident, she and her father moved to New York, where he came to prominence as a surgeon and she grew into a driven stock analyst. She’s been adrift since she was laid off, though, so the notification about inheriting a house from her great-aunt offers the break she needs. The house in Herne Hill jogs long-buried childhood memories: Her mother was raised there, and they visited her great-aunt often. On her first day back she’s surprised by a cousin, Natalie, who suspiciously offers to help. Nat then invites Nick, an antiques dealer, to get the house sorted out. Amid the bric-a-brac there are some notable paintings—a portrait of a stunning young woman hangs in the conservatory and a scene of Tristan and Isolde has been wrapped in linen and hidden in a closet. The chapters alternate between the story of Julia and Nick researching the paintings (and the windfall they may bring) and the life of the young woman in the portrait, Imogen Grantham, who finds herself unhappily married in 1849. She had thought she and her husband, Arthur, would share their love of antiquities, but after their marriage, Arthur treats her like a doll. It's only when the Pre-Raphaelites come to study Arthur’s collection that Imogen realizes what she’s been missing. Arthur asks one of the painters, Gavin Thorne, for a portrait of Imogen, and soon artist and model have begun an affair that will have deadly consequences. Meanwhile, Julia and Nick begin a summer romance that may cure their historic skittishness.