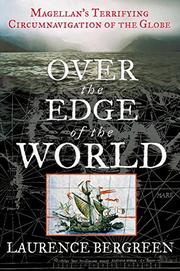 OVER THE EDGE OF THE WORLD

Magellan’s Terrifying Circumnavigation of the Globe

A vivid account of Magellan’s star-crossed voyage around the world nearly five centuries ago.

Fond of epic adventures and odd ducks alike, Bergreen (Voyage to Mars, 2000, etc.) finds a nice blend of the two in Ferdinand Magellan’s life and career. Considered a tyrant by some, a traitor by others, and often in trouble with one legal authority or another, Magellan seemed driven by a need both to serve the powerful and to make himself rich and/or famous in the bargain; he also had a habit of tripping himself up and making powerful enemies, racking up charges of selling provisions to the Arab enemy in one war and earning mistrust for abandoning his native Portugal for the chance to command an expedition for archrival Spain. Magellan’s skills as a soldier and apparent lack of fear in promoting his aims—if matched by a deeply provisional knowledge of the world beyond Iberia—eventually won him the exclusive contract to find the fabled Spice Islands and claim the lands he found for Christianity and Spain. Thanks to bad luck, poor skills on the human-relations front, and some unfortunate missteps at sea, Magellan found himself confronting near-constant mutinies great and small; he survived them only to die, in 1521, in the Philippines after picking a fight with the natives in a misguided attempt to prove his omnipotence. Bergreen, citing Magellan’s shipmate and chronicler Antonio Pigafetta, suggests that the Captain General’s ever-quarrelsome crew deliberately failed to come to his aid—“or their officers ordered them to stay put,” effecting an easily disguised mutiny by another name. Only one of the Magellan armada’s ships made it back to Spain, and 200 sailors died on the voyage. Still, Bergreen writes, the expedition had an important effect not only in pointing the way to the Spice Island trade, but also in dispelling reigning myths about “mermaids, boiling water at the equator, and a magnetic island capable of pulling the nails from passing ships.”

Very nicely written through and through, and a pleasure for students of world exploration.