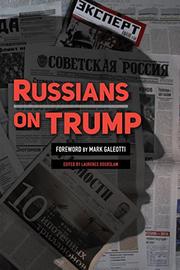 A collection of articles and editorials from the Russian press focuses on President Donald Trump.

Given the flood of coverage in America concerning Trump’s connections to Russia, that country’s effect on the 2016 election, and U.S.–Russian relations under the new administration, debut editor Bogoslaw does a great service in providing a compilation of Russian pieces concerning the leader and his presidency. The well-structured book goes far toward addressing the often myopic view of U.S. readers by challenging the American public to see Trump from an international perspective. The editor begins with selections regarding Trump as a businessman and entertainment figure from the days before his foray into politics. The work then moves on to coverage of the Trump campaign. These pieces, though differing in opinions, point to the wide support that he had in Russia as he campaigned against Hillary Clinton. “It is sad,” notes one article, but a recent “Gallup poll clearly shows that Trump and his American admirers have now become a mirror image of today’s Russian mass consciousness.” The book moves on to coverage of Trump’s election victory, asking “How did this happen?” and “What next?” Moving forward, the volume presents pieces regarding the administration’s “Russia ties” and his first months in office from the perspective of foreign policy. Bogoslaw points out a number of captivating aspects of Russian coverage as the work moves along, such as this insight: “Even when Russian commentators are most confused, disappointed and even outraged by Trump’s decisions, they do not impugn his character, honesty or intelligence—unlike their counterparts in the West, particularly in the US.” Editorial comments also clarify a number of finer points for American readers, such as an explanation of “yarky,” an adjective Vladimir Putin once use to describe Trump. While the U.S. press largely translated the term as “brilliant,” it is explained that the word more properly means “colorful.” Opinions of the writers quoted range from excitedly pro-Trump to vehemently anti-Trump and almost every shade in between.

Well-organized and edited, this intriguing volume should serve as an excellent resource to those thoroughly interested in Trump’s position on the world stage.