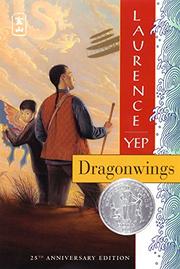 From the Golden Mountain Chronicles series

In the beginning, all is strangeness to Moon Shadow as he leaves the Middle Kingdom to join his father in the Land of the Golden Mountain. . . only to end up in the Tang people's quarter of San Francisco where the drunken "demons" often beat up Tang men and his uncle Black Dog, an opium smoker and a crook, keeps the family all too involved with the brotherhoods.

Later, Moon Shadow actually makes friends with a red-faced demon, the doughty Mrs. Whitlaw, and lives in the demon part of town until the earthquake comes. But this is mostly the story of Moon Shadow's devotion to his dreamer father, who is given the name Windrider by the Dragon King himself in a vision and who fulfills his destiny by building, at enormous sacrifice, a twelve horsepower airplane similar to the one the Wrights had flown only a few years before. Windrider (based loosely on an actual Chinese-American aviator) is a fascinating figure who believes deeply in the old myths and is entranced by the new magic of electricity, motor cars and aeronautics. Other elements, such as Moon Shadow's rapprochement with Mrs. Whit. law—he learns to drink a disgusting substance called cow's milk, she rethinks her old ideas about dragons—depend more on familiar tensions and humorous accommodations. Even so, this is a realm of exprience almost unknown to us demons.

And the dream that becomes the plane Dragonwings lifts this into a world where truth and imagination are one.