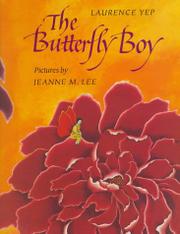 "Drawn from the writings of Chuang Tzu [fourth century B.C.],...the Butterfly Philosopher," a tale that explicates the idea that wisdom may lie in an altogether fresh point of view.

The first part of the story is somewhat confusing: "a boy...dreamed he was a butterfly, and, as a butterfly, he always dreamed he was a boy." His literally acting like a butterfly causes "trouble"—when he tries to fly above a buffalo, he lands on its back and is carried off; when he's hungry, he astonishes bystanders by sucking a flower's nectar. However, like a butterfly, he doesn't mind derisive laughter, and he has a special understanding of natural beauty—and also of an invading army (he imagines it to be a centipede) and its warlord, whom he sees as a beetle on its back (the insulted lord lets him go as "either madman or a prophet"). When lord and army perish, the Butterfly Boy is suddenly revered, "but praise meant no more to him than insults." In Lee's spare, carefully constructed paintings, figures are stylized and the butterfly's alternate visions appear in insets.

Not easy or entirely successful but, still, a philosophic tale with worthy and venerable roots, certainly worthy of discussion.