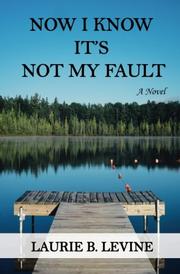 NOW I KNOW IT'S NOT MY FAULT

by Laurie B. Levine

A vulnerable 14-year-old girl becomes the victim of a beloved teacher in Levine’s debut novel.

Five years ago, when Alexandra “Alex” Geller was 9 years old, her mother died suddenly from a brain aneurysm. Alex’s father, Dr. Richard Geller, was emotionally ill-equipped to deal with raising Alex and her two younger brothers, Jason and Ari. Enter biology teacher Paula Hanover, who’s beautiful, fun-loving, and rebellious; she befriends Alex, who’s a student in her class. Paula praises the teenager, offers her guidance, and gradually becomes the single most important person in her life. To Alex, Paula is a parental figure who fills the excruciating void left by her mother’s death, and for the first time in many years, Alex feels that she’s not alone. Paula, in turn, plays upon the young girl’s insecurities and her need for validation and love, manipulating her through a combination of reward and punishment. She begins driving Alex home at the end of the school day and shares inappropriately intimate details about her own life. She also slaps Alex, painfully squeezes the back of her neck, and eventually starts spanking her. Alex accepts all this as proof that Paula loves her; early on, she begins keeping a list (“Ways I Know Paula Likes Me”) that she adds to throughout the novel. The very worst punishment for her is when Paula periodically freezes her out. The author, a marriage and family therapist, focuses on a subtler form of abuse than most readers will be accustomed to reading about. Alex is the articulate, first-person narrator of the tale; readers experience her obsession and emotional deconstruction from the inside, and it’s a chilling ride. Levine effectively weaves her cautionary tale by drawing from her years as a therapist dealing with “trauma stories.” Her deep understanding of “grooming” behavior—the process by which an abuser leads a victim into a dependent relationship—helps her to create a character that jumps off the page. Overall, this is an important addition to the discussion of abuse prevention and detection.

An infuriating, frightening, and compassionate story of abuse.