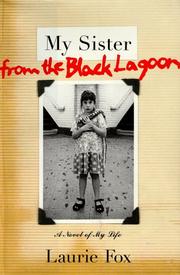 MY SISTER FROM THE BLACK LOGOON

With powerful descriptions but low-watt plotting, a first novel details a sister’s acceptance of her sibling’s mental illness and her own struggle to survive. Fox, a poet, gets down pat the sensation of a walking-on-glass-life with the mentally ill, but the story itself —loosely autobiographical—told by Lorna, of life with older sister Lonnie, relies far too much on long set-piece scenes overburdened with imagery. And Lonnie, though vividly evoked, seems an elusive if immensely tragic figure, her illness never fully diagnosed. Lorna begins with their childhood in a Los Angeles suburb, where it is soon apparent that something is very wrong with Lonnie. Her emotions are volatile, she’s precociously intelligent, yet also dysfunctional, preoccupied with violence, fond of horror comics, decapitating toys, and creating multiheaded monsters with her stuffed animals. Later, Lonnie takes hormones to become the boy she feels she really is. She also dearly loves Oozy, the name she gives Lorna, who thinks Lonnie knows “stuff we can’t even imagine.” As she grows up, Lorna makes “an art out of normalcy,” trying to compensate for Lonnie’s craziness. She records her parents’ struggle to help her sister, the futile visits to doctors, hospitalizations, her mother’s growing emotional exhaustion, and the breakup of her parents’ marriage. At the same time, she is also maturing, making friends in high school, getting a boyfriend, discovering a talent for poetry and acting. But in college her normality begins to dissolve, and, haunted by Lonnie’s tragic plight, she breaks down. A long-evaded visit to Lonnie, now in a group home, helps her finally accept her family, herself, and her sister, whom she can now love and admire for her courage and her difference. Heartfelt, for sure, but told at a pace too stately to convey to readers the raw pain and tragic urgency of the situation.