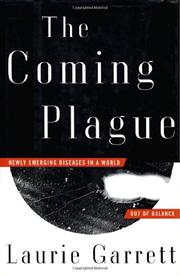 Newly Emerging Diseases in a World Out of Balance

Garrett, Newsday and former National Public Radio reporter, has written an excellent encyclopedic history—and jeremiad—of man versus microbe in the last decades of the century.

"California School Becomes Notorious for Epidemic of TB.'' "In a Panic, Rwandans Die in Stampede.'' No book about to be launched in 1994 could ask for better confirmation of its somber thesis than the front-page headlines in a recent edition of the New York Times. Only a few years ago science was celebrating an end to plagues and an extended life span, but now it appears that we are losing the battle against infectious illness. Microbes mutate as fast as companies synthesize new drugs to combat them. Jet travel, the sexual revolution, and overpopulation are just a few of the whole-earth changes that favor the survival of old and new bugs. In chapter by chilling chapter, Garrett recounts the stories of deaths from Machupo, Lassa, and Ebola diseases—viral infections decimating small villages in South America and Africa. In the best tradition of Berton Rouech, each account is a dramatic narrative with heroes and heroines: the doctors and epidemiologists who round up the usual suspects (rats, mice, bugs) to come up with answers. Modernity brings ironic twists—reused syringes, recycled air conditioning—to amplify infection. But the ultimate compounding factor is a "Thirdworldization,'' an ugly coinage to describe an ugly situation in which the inhabitants of poor nations are malnourished, displaced, terrorized, demoralized, e.g., Rwanda. Garrett chronicles AIDS, the spread of antibiotic-resistant TB and malaria, Legionnaire's disease, last year's re-emergence of Hanta viruses among the Navajo, along with chapters on microbial genetics and resistance. Prejudice and politics are given their due from clearly liberal Garrett, and a glimmer of a solution comes in the form of eternal vigilance and surveillance.

One does not like to apply the phrase too often in a book review, but here is a volume that should be required reading for policy makers and health professionals.