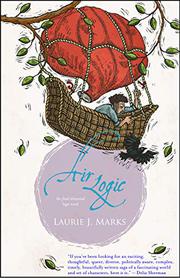 The culminating chapter of Marks’ (Water Logic, 2007, etc.) acclaimed tetralogy finds Karis G’deon and her sprawling family once more imperiled, this time by the legacy of violence that threatens to unravel the fragile peace they have woven across their land.

Marks’ Elemental Logic series introduced readers to the realm of Shaftal, an intricately imagined land whose people operate within the boundaries of their basic natures—here defined as logics—which sometimes bequeath them with access to magical, elemental powers and sometimes embroil them in unsolvable internal conflicts. In the first book of the series, the invasion of the magic-hating Sainnites destroyed Shaftal’s government and exposed its people to subjugation and starvation under the cruel rule of the invaders. In true fantasy fashion, only Karis, a reluctant earth witch addicted to a deadly drug, and her band of equally unlikely allies can rise to rebuild the shattered legacy of Shaftal into a new world capable of sheltering Shaftali and Sainnite alike. The final book opens in what seems like the epilogue of their struggles. Karis has assumed the mantle of leadership, and her family—a polyamorous clan of friends, lovers, parents, and sparring partners—has joined their sometimes-querulous forces to work in unity toward the new governmental order. Peril follows them, however, as series favorites (Zanja, Karis’ wife and last member of a slaughtered border tribe; Emil, a scholar-warrior from old Shaftal; Medric, a Sainnite seer who knows more than he can say; Norina, a disagreeable air witch for whom both love and justice are swift and total) must do battle with a traitor from within their own home who threatens not only to undo all their efforts at peace, but also the bonds of their family. Invested in diversity, the Elemental Logic series as a whole represents characters who are neurodiverse, queer, ethnically and racially varied, and unaffected by gendered assumptions of societal roles. This final book goes one step further to champion the value of long, committed friendships as equal to, and sometimes even superior to, the passions of romantic love. Shaftal is a convincing world, lovingly detailed and fiercely envisioned. Marks' characters are so real in their depth of feeling that a reader unfamiliar with the convoluted interpersonal relationships established over the last three books can feel left behind. However, as the last note in a familiar melody, this book rings true.

A final book that stays true to the spirit of the whole, sending readers out of Shaftal on a high note.