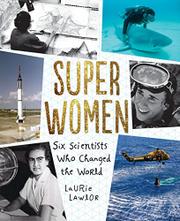 Six Scientists Who Changed the World

Aside from “Shark Lady” Eugenie Clark and, thanks to attention inspired by recent histories and a film, NASA “computer” Katherine Coleman Johnson, Lawlor’s subjects will likely be new to young readers. All were, as the author puts it, struck by “thunderbolts of discrimination” for being women and, in the cases of Clark (whose mother was Japanese) and Johnson (who was African-American), people “of color.” Nevertheless, they persevered, made important discoveries in their varied fields, and, eventually at least, earned significant recognition. Photos and direct quotes appear but sparingly in the narratives, but readers will come away with some sense of each groundbreaker’s character and private life to go with concise but lucid explanations of her contributions. If some of the obstacles they faced seem ridiculous to contemporary readers—in order to use the Mount Wilson Observatory in the mid-1950s, for instance, “quasar hunter” Eleanor Margaret Burbidge had to pose as her husband’s assistant and could not use the dining hall or bathroom—even now no one will argue that the playing field has leveled for women in the sciences.

A handful of new role models, along with light shed on just who made certain significant advances in astronomy, archaeology, biology, medicine, and plate tectonics.