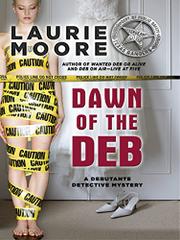 DAWN OF THE DEB

A debutante finds herself responsible for handling a mishmash of potential disasters.

Though she’s just returned from rescuing her ungrateful little sister, Teensy, from south of the border, Dainty Prescott is soon thrust into another dangerous situation when she and some friends witness the murder of a spa’s owners and staff. Dainty leads her friends through a dangerous escape, but she can’t get past the injustice of getting into trouble in the first place. She never would’ve been at the spa if wealthy businessman Avery Marshall hadn’t called in a favor and asked Dainty to turn his tomboy stepdaughter, Dawn, into the next big thing at the Rubanbleu ball. Thinking a spa weekend with some well-bred influences might make Dawn a bit more of a lady, Avery insisted that Dainty be her escort. But witnessing murders really puts a damper on the girls’ weekend and seems to make Dawn act a little crazy—though later it turns out that she’s stopped her psych meds. This is only the beginning of a slew of barely connected troubles for Dainty, including her father’s decision to put her childhood house on the market and her grandmother’s apparent drowning in a cruise-related incident. Barely there for her is boyfriendish lawman Jim Bruckman, though his absence may depend more on the limits of narrative space than on the plot: Dainty’s Debutante Detective Agency and her job at WBFD-TV barely rate mentions with all the other incidents crammed in.

Forget plots and subplots. Moore (Deb on Air—Live At Five, 2013, etc.) has so much going on that readers may have to take notes.