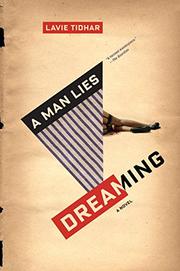 A down-on-his-luck Hitler, now working as a private detective in London, searches for a missing Jewish girl in this wild, noir-infused alternative history from genre-bender Tidhar (Osama, 2011, etc.)

After the communists take over Germany in the early 1930s, the one-time leader of the National Socialists, now calling himself Wolf, escapes to London, where he tweaks his appearance ever so slightly (“He could no longer abide the moustache”) and sets up shop as a gumshoe. His need for cash supersedes his virulent anti-Semitism, and soon he's in the employ of Isabella Rubinstein (“a tall drink of pale milk”), on the hunt for her sister, who was smuggled out of Germany by ex-Nazis but seems to have vanished. If the proceedings sound pulpish, it’s because they're the imaginings of Shomer, once a “purveyor of Yiddish shund”—lowbrow detective stories and the like—now a prisoner at Auschwitz. Tidhar deftly shifts between these two worlds, dedicating the majority of the novel to Wolf’s “fictional” London of 1939 but also illuminating Shomer’s horrible reality, all the while crafting a mystery that is absorbing in its own right. As Wolf hunts for the girl, he begins to investigate his former associates, and Tidhar has good fun populating the story with real-life characters whose lives have taken unexpected turns: Hermann Göring is now “a simple pimp,” Leni Riefenstahl works for Warner Bros. The presence of a Hitler-obsessed serial killer and Wolf’s association with Oswald Mosley, the British Fascist now running for prime minister, keep things moving. The story isn’t for the weak of heart: Tidhar/Shomer revels in describing Wolf’s sexual proclivities, and at least one torture scene won’t be easy for readers to forget. But though at times the narrative feels almost farcical, Shomer’s presence imbues it with unexpected weight, resulting in an ending that is more gut punch than punch line.

A wholly original Holocaust story: as outlandish as it is poignant.