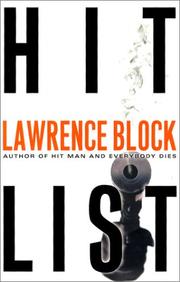 Fresh from his triumphant star turn in the short-story cycle Hit Man (1998), Block's reflective professional assassin John Keller finally fulfills his fans' dearest wish by getting a novel of his own.

Although Keller is a solid citizen who collects stamps, shows up for jury duty, and carries out every hit with consummate professionalism—even if his employer is tactless enough to identify the subject by showing Keller a Christmas card photograph of his family—things don't seem to be going right for him. Narrowly escaping death while he's on the job in Louisville, he returns to New York to accept a contract that feels like an interpolated short story. Continuing on his methodically death-dealing rounds in Tampa, in Boston, in the Chicago suburbs, he takes time out only for casual sex with jewelry-maker Maggie Griscomb and a reading from astrologer Louise Carpenter that reduces him to tears. But little things that go wrong with almost every job make it increasingly clear that he's attracted the attention of a rival hit man who doesn't think the country is big enough for both of them. Don't expect the high intensity produced in the Keller stories by their central irony, the contrast between the hero's lethal profession and his organization-man lifestyle and opinions. Instead, listen for the equally ironic but maddeningly meandering conversations between Keller and Dot, his prim scheduler in White Plains.

These conversations, which seem such blather, are blather whose interplay of banality and olympian judgment, as in James M. Cain and Quentin Tarantino, forms the real heart of this modern samurai fable.