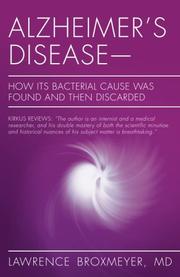 How Its Bacterial Cause Was Found and Then Discarded

A historical account of the debate over the cause of Alzheimer’s disease.

Alzheimer’s is both debilitating and near ubiquitous; if one lives long enough, Broxmeyer (Autism, 2014, etc.) observes, the odds are high that one will suffer some iteration of it. He also notes that Alois Alzheimer, the scientist after whom the disease is named, likely contributed as much as anyone to the general confusion regarding its precise nature. In 1901, Broxmeyer says, Alzheimer examined Auguste Deter—a woman suffering from diminished memory and behavioral abnormality—and seemed determined to avoid implicating tuberculosis even though the potential link between the two was clear. At the start of the 20th century, TB was troublingly common, but Alzheimer insisted that whatever infectious disease caused the newly discovered malady was itself altogether new. However, the author points out, German neuropathologist Oskar Fischer observed in autopsies that brains addled with Alzheimer’s disease also exhibited a germ associated with TB. Later, it would be discovered that tubercular microbes could generate amyloid fibrils very similar to those found in the Alzheimer’s-related plaques and seemed to affect the brain’s immune cells in the same way. The author is an internist and a medical researcher, and his double mastery of both the scientific minutiae and historical nuances of his subject matter is breathtaking. This is more than an account of a scientific debate—it’s also an examination of the sometimes-unempirical way that such debate proceeds, as it’s conducted by human beings with agendas of their own. The science in this book can be formidably complex, and although Broxmeyer seems to make a concerted effort toward clarity, his work isn’t for the casual layperson. As a result, although it’s a relatively short book—less than 200 pages of text—it is by no means a quick read. Nevertheless, readers with strong science backgrounds will be impressed by the author’s undeniable competence, as well as his journalistic approach to chartering the evolution of thought regarding one of our era’s most challenging diseases.

A difficult but rewarding look at a major scientific dispute.