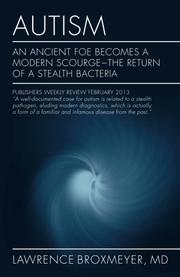 A doctor proposes a link between autism and tubercular infections.

Autism has proved to be one of the more haunting medical mysteries of recent times. As the diagnosis rate explodes, desperate parents and baffled doctors have searched in vain for an explanation. Broxmeyer, an internist and experienced medical researcher who’s studied both AIDS and Alzheimer’s disease, offers a new perspective. His book focuses on an underresearched link between autism and fetal exposure to tuberculosis bacteria. Broxmeyer contends that this isn’t exactly a new idea, but one that has been discussed in the psychiatric community for years. He offers a brief overview of the history of autism, and then traces key figures in the realms of psychology, tuberculosis research and pathology who have suggested a link between exposure to tuberculosis and childhood mental disorders. Broxmeyer concludes that a vast collection of useful research on the potential link between autism and tuberculosis has been overlooked by the medical community. This oversight, he contends, has slowed the progress of autism research at a time when it’s most needed. The hypothesis is a fascinating one, and Broxmeyer provides evidence from enough esteemed researchers to give credence to his ideas. But the book suffers when it’s unsure of its intended audience. Lay readers will want a more in-depth discussion of the history of autism and the medical community’s reaction to it; scholarly readers and autism researchers will want more hard data and conclusive arguments. In trying to accommodate both audiences, Broxmeyer divides his argument, diluting its effect on all readers. The brief chapters and loosely connected narrative only make his arguments harder to follow and the conclusion more abrupt.

Parents of autistic children will be interested, but the investigation continues elsewhere.