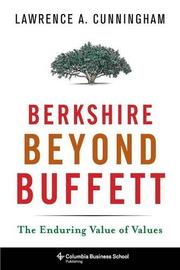 The Enduring Value of Values

by Lawrence A. Cunningham

Cunningham (Business Law/George Washington Univ.; Contracts in the Real World: Stories of Popular Contracts and Why They Matter, 2012, etc.) discusses whether Berkshire Hathaway, the investment vehicle for billionaire Warren Buffett, will outlive the death of its founder and why.

As the editor and publisher of Buffett's annual letters to Berkshire's shareholders and someone who knows his subject personally, the author will no doubt be considered an authoritative source by most readers. Cunningham also consulted with other Berkshire insiders, including owners—e.g., Buffett's son Howard, a co-director of Berkshire, and Buffett’s partner, Charlie Munger, formerly of Wesco Financial—and managers of operating subsidiaries. The author provides a full history and profile of Berkshire's major subsidiaries, as well as the company's Class A shareholders. Cunningham isn’t just interested in the history of Buffett and Berkshire, however. He is in search of the protective “moat” that shelters Buffett's creation from competitors seeking to increase their market shares. Initially, the author thought it might be Buffett himself or that it was predicated on the “float” of his insurance companies (the difference between claims paid out and premiums paid in). The author concludes that Berkshire is protected by its unique culture, which constitutes its potential for survival. Organizationally complex and “highly decentralized,” with twice the number of separate business units as General Electric, Berkshire embraces family-owned businesses, like Benjamin Moore Paints, as well as self-starters. It is a publicly quoted company that also owns private companies and franchises like Dairy Queen. Cunningham believes that the disparate businesses are held together by their shared beliefs about the ethical purposes and responsibilities of business. These traits have also combined to allow them to successfully avoid the pitfalls of buyouts, asset stripping, public offerings and indebtedness.

Not exactly an independent point of view but one that will surely provoke much curiosity.