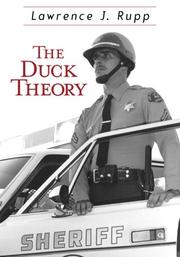 Like a drill instructor terrorizing cadets on their first day—which he has done—first-time author Rupp isn’t really all that bad, but he puts his political opinions right up front. In no fewer than 180 chapters, this memoir covers his decades as a lawman patrolling the roughest slum districts of Compton, Watts, Lynwood and South Central Los Angeles from the late 1960s to the ’90s, usually as part of the Sheriff’s Department, with a sideline in training new recruits. He loved the job, even when it put him in the center of protests, office back-stabbing and racially tinged “terrorism” by militants such as the Black Panthers. The writer despises the news media for stereotyping police brutality and turning criminals into victims. He has no sympathy for street gangs and their apologists; he refuses to identify the distinct “youth groups” by name, as that would show too much respect. He doesn’t care for behind-the-scenes power blocs, and he hates the hemp-heads pushing for marijuana legalization. He does support suspect profiling. The title references the adage that if it walks like a duck, quacks like a duck, etc. Just replace “duck” with a shifty black youth in sagging pants with a gun stuck in the waistband when a robbery has just been committed, and you’ll get the picture. (“Check the unskewed stats,” he says.) However, Rupp says a lot of people won’t get the picture, and he offers the scoop that municipalities (Compton especially) have fudged crime stats. Some of his non-PC contrarianism is sublime: Rupp defends Michael Vick, since dogfights for sport are routine in the ’hood, and if that’s the worst thing Vick’s ever done, then he’s a much better man than most “thugs” recruited as pro athletes. Rupp’s youthful job apprenticeship as a meat-cutter helped him get through the gruesome stuff, but the memoir isn’t all heavy and horror. He describes going undercover to spook the “lingering transient homosexuals” out of an established gay neighborhood; his post-retirement bodyguarding for celebrities, including the Dixie Chicks; and on-the-job pranks as ritual hazing for superiors and cadets alike. Behind the name-calling, score-settling and tributes to fallen comrades, one senses that Rupp speaks truth when he says he doesn’t care what color people are as long as they act as responsible, respectful citizens. Though when it comes to liberals, he considers his mission “to irritate you and the rest of your kind.” So-called “effeminate lackeys” are especially likely to close this case.