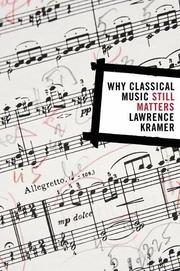 Despite its decline in popularity, classical music retains enormous personal and cultural significance.

So avers first-time author Kramer (English and Music/Fordham Univ.), whose noble ambition here is to explain to a bigger classroom why more people ought to love what he loves. He’s a smart guy and knows that he will gain little by dissing pop culture, so he does his best to discuss and even salute the popular. He alludes to films ranging from the expected (The Pianist) to the surprising (Soylent Green) and to such TV shows as West Wing and The Simpsons. He tries to keep it real, even committing some pronoun-case errors for (presumably) an I’m-just-plain-folks effect. He does his best to show how people are like melodies, how the piano is a soul inside a machine. His passion is palpable on every page. He asks keen questions, such as, “How does the representation of pain give pleasure, particularly if the pain is strong and unrelieved?” But Kramer ultimately ends up preaching to the choir. He assumes his readers already possess considerable knowledge of music theory, discussing without any explanation major and minor keys, leitmotifs and contrapuntal interplay; he quotes Wittgenstein, Nietzsche, Kierkegaard and other heavyweights, as well as the poetry of Shelley, Wordsworth and Arnold. It’s almost as though partway through the manuscript he decided to forget about populism or popularity and give you his real—i.e., highbrow—reasons. The final chapter contains the most striking image: a busker playing a Bach violin sonata at a New York City subway station to an audience of more people than you would predict. This prompts Kramer to wax hopeful and even philosophical, but he underestimates one factor at least as powerful as the music: The girl playing it was hot.

A love letter that sometimes loses control of its purpose.