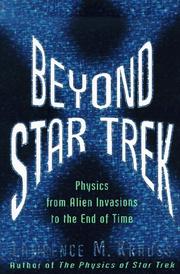 Physics from Alien Invasions to the End of Time

Many scientists say that reading science fiction inspired them to launch their careers. Krauss concludes: Why not draw on sci-fi lore, exploits, and tales to teach hard science? The author (Physics and Astronomy/Case Western Reserve Univ.) scored a bestseller with his previous book, The Physics of Star Trek (1995). Now he expands his scope to address other sci-fi hits, ranging from the film 2001: A Space Odyssey to TV's The X-Files. He also scrutinizes such newsworthy events as the chess match between world champion Gary Kasparov and an IBM computer. Krauss begins by examining the alien attack on Earth that was portrayed in the movie Independence Day. He uses basic Newtonian physics to show that the gravitational effects of the huge arriving alien ships would have caused floods and earthquakes sufficient to destroy our civilization before the invaders had even fired a shot. Next, the author assesses the supposed flight characteristics of UFOs, depicted as stopping on a dime and making sudden sharp turns at utterly unbelievable speeds. Krauss calculates that these maneuvers would create inertial G-forces greater than a close-range nuclear explosion; neither the pilots nor any conceivable construction material could withstand them. Another chapter examines the cost of mounting an interstellar expedition, a journey that would require many decades to complete and cost more than the moon. Later chapters apply the principle of general relativity to star travel, explore computer consciousness, and forecast the end of the world. The book concludes by affirming the author's belief that the universe is a place of boundless potential—and that we must fathom it. Perhaps because Krauss shares the public's affection for the pop sources he consults, his book will entertain and instruct general readers without insulting the scientifically literate. ($75,000 ad/promo; author tour)