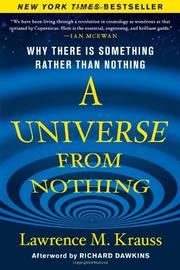 A UNIVERSE FROM NOTHING

Why There Is Something Rather Than Nothing

Theologians of all religions know how the universe arose. Scientists traditionally considered this a metaphysical question outside their purview, but theoretical physicist Krauss (Director of the Origins Project/Arizona State Univ.; Quantum Man: Richard Feynman’s Life in Science, 2011, etc.) asserts that laws of physics not only permit something to arise from nothing, they may guarantee it.

The author delivers plenty of jolts in this enthusiastic and lucid but demanding overview of the universe, which includes plenty of mysteries—but its origin isn’t among them. Einstein's relativity proves that empty space can curve, and quantum physics does not forbid matter from appearing out of nowhere provided it also vanishes almost immediately. In the odd, entirely statistical world of quantum physics, whatever is not forbidden can happen and experiments reveal “virtual particles” popping in and out of existence everywhere. These quantum fluctuations were occurring before the dawn of time. All were thought to have quickly disappeared, but perhaps under the right conditions one lived sufficiently long to give rise to the seminal event of the early universe: inflation. Thereafter, the original tiny volume expanded by an enormous factor to produce our universe. Krauss recounts its history and structure, emphasizing recent discoveries that vastly increased both our knowledge and ignorance. It turns out only one percent of the universe consists of familiar matter and energy; the rest is a mystery. Also, a grim future awaits us, although that lies a trillion or so years ahead.

A thoughtful, challenging book—but not for the faint of heart or those not willing to read carefully.