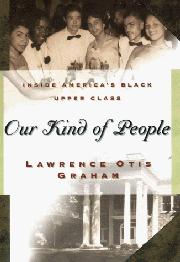 OUR KIND OF PEOPLE

A record of the pleasures and the follies of an elevated black society. According to Graham, all racial, ethnic, and religious groups lay claim to their own privileged class—that group which, either because of family name, wealth, title, education, or other circumstance fashions itself a cut above the rest. The class sets itself apart with their clubs, their fraternities, and their sororities, while looking askance at any outsiders who can never make the grade. The reasons for forming such exclusive groups are often perfectly honorable, most commonly because members have been denied access to other organizations in the larger population. But matters can get out of hand, as Graham (Member of the Club: Reflections on Life in a Racially Polarized World, 1995) perhaps unwittingly demonstrates in his examination of what he calls the black elite. His is less of a critical examination and more of a glossary of people, places, and things constituting the black upper class. And as one might expect, this realm of the right colleges and degrees and pedigrees is downright incestuous, a world where cotillions and coming-out parties still matter. Graham, an insider and attorney, knows it well. Yet his contemporary savvy matters less, in the end, than does his appetite for historical detail. His insights into the story of blacks in vacation spots like Martha’s Vineyard in Massachusetts and Sag Harbor on Long Island, N.Y., for instance, are fascinating. Nevertheless, the ongoing claustrophobia of privilege (with many of the same people and their coteries cycling and recycling) can weary a reader. One walks away with the impression that Graham’s effort could have been cut in half—and all one would have missed is an extra afternoon of interminable croquet, followed by cucumber sandwiches down by the gazebo. (38 b&w photos, not seen) (Author tour)